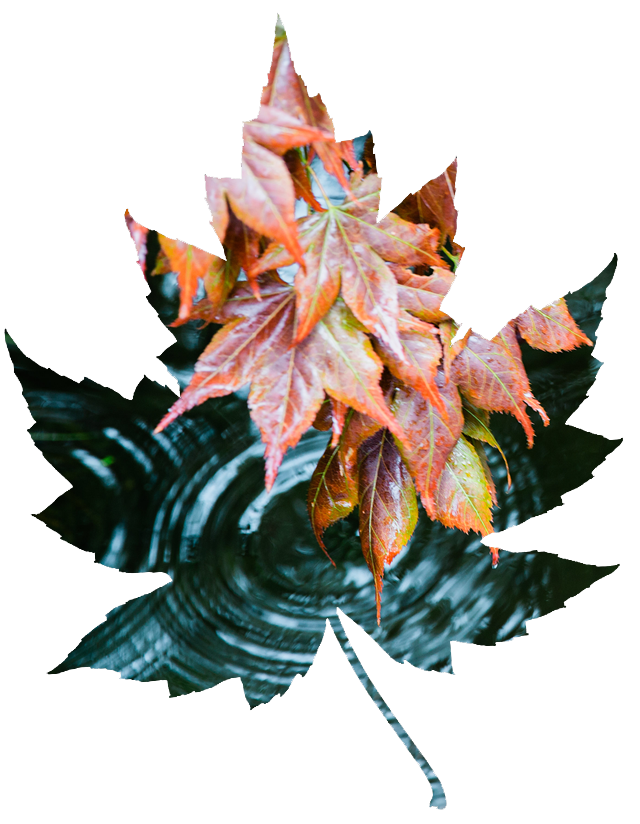 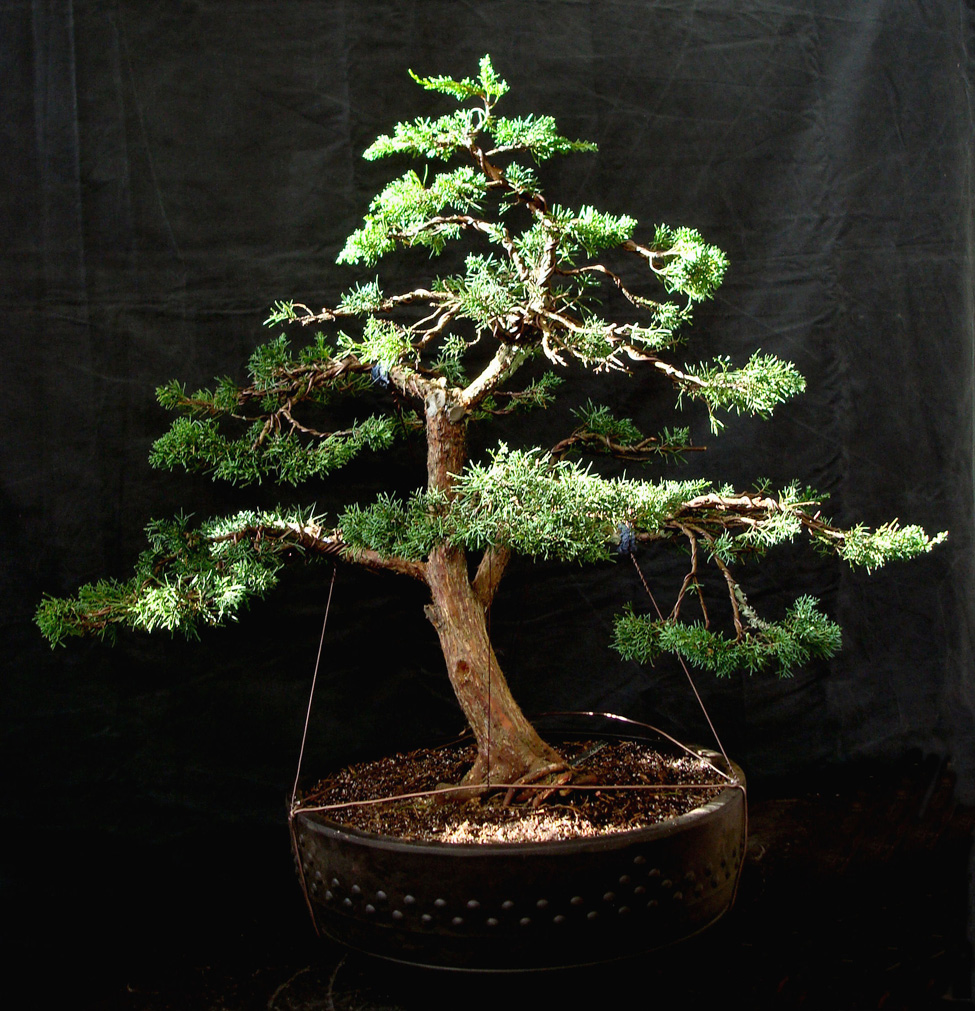 The Japanese Garden in Cornwall provides an authentic Japanese
garden design in an idyllic Cornish setting. Built as a meditative garden it is the perfect space where one can calm the mind & let go of unwanted stress through contemplation & reflection.

Restyling a bonsai tree can be a tricky skill to master, however when done well the tree can be transformed in to a living sculpture. There are many styles ranging dramatically from a windswept style where by all the foliage is on one side of the tree, to a cascading style in which the entire trunk bends downward as if it is growing upside-down. Each style has rules that depict its shape & aesthetic & some trees lend themselves beautifully to a particular style.

Below are a small collection of examples of before & after images, styled by Robert Hore 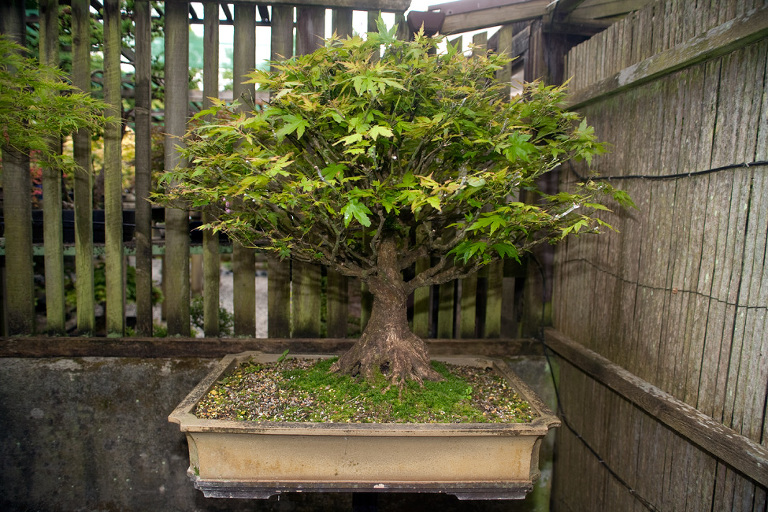 Hokidachi
The broom style is suitable for deciduous trees with large numbers of fine and delicate branching. The trunk is straight and upright and does not continue to the top of the tree; it branches out in all directions at about 1/3 the height of the tree. The branches and leaves form a ball-shaped top which is beautiful in leaf but also a stunning sight during the colder months when the leaves have dropped.

Chokkan
The formal upright style is one of the most common forms of Bonsai. This style often occurs in nature, particularly when the tree is exposed to lots of light and does not have to compete with other trees. For this style, tapering of the upright-growing trunk must be clearly visible. The trunk must therefore be thicker at the bottom and must grow increasingly thinner with the height. At about 1/4 of the total length of the trunk, branching should begin. The top of the tree should be formed by a single branch; the trunk should not span the entire height of the tree. 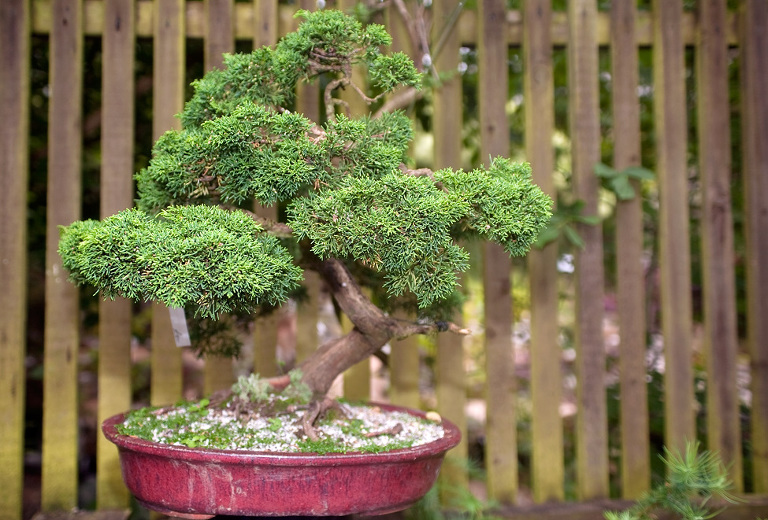 Moyogi
The informal upright style is common in both nature and in the art of Bonsai. The trunk grows upright roughly in the shape of a letter ‘S’ and at every turn branching occurs. Tapering of the trunk must be clearly visible, with the base of the trunk thicker than the higher portion 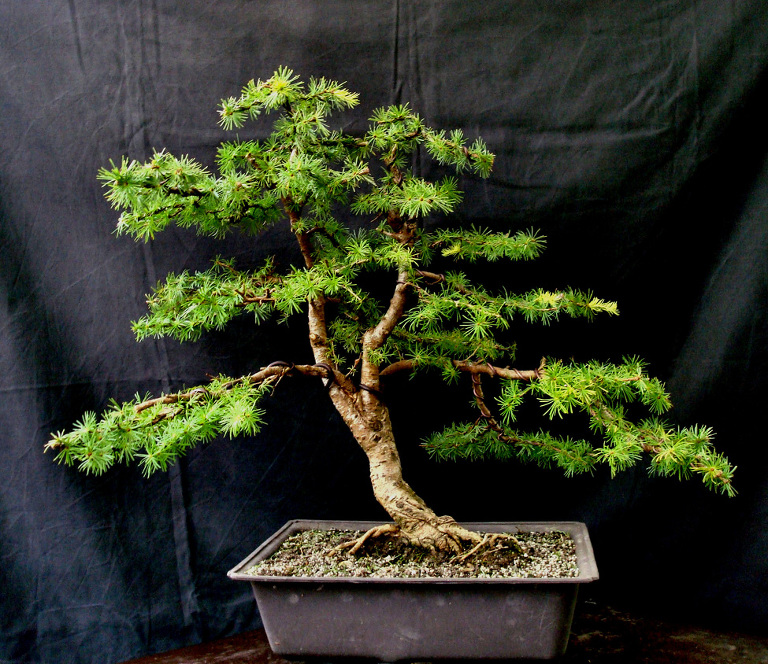 Shakan
As a result of the wind blowing in one dominant direction or when a tree grows in the shadow and must bend toward the sun, the tree will lean in one direction. With Bonsai, the leaning style should grow at an angle of about 60 – 80 degrees relative to the ground. The roots are well developed on one side to keep the tree standing. On the side toward which the tree is leaning, the roots are clearly not as well developed. The first branch grows opposite the direction of the tree, in order to create a sense of visual balance. The trunk can be slightly bent or completely straight, but still be thicker at the bottom than at the top.

Kengai
A tree living in nature on a steep cliff can bend downward as a result of several factors, like snow or falling rocks. These factors cause the tree to grow downwards. With Bonsai it can be difficult to maintain a downward-growing tree because the direction of growth opposes the tree’s natural tendency to grow upright. Cascade Bonsai are planted in tall pots. The tree should grow upright for a small stretch but then bend downward. The crown of the tree usually grows above the rim of the pot, but the subsequent branches alternate left and right on the outermost curves of an S-shaped trunk. These branchings should grow out horizontally in order to maintain balance of the tree.

Bunjingi
In nature this style of tree is found in areas densely populated by many other trees and competition is so fierce that the tree can only survive by growing taller then all others around it. The trunk grows crookedly upward and is completely without branching because the sun only hits the top of the tree. To make sure that it looks even tougher, some branches are “Jinned” (without bark). When the bark has been removed from one side of the trunk, the trunk is referred to as a “Shari”. The idea is to demonstrate that the tree has to struggle to survive. These trees are often placed in small, round pots.

Fukinagashi
The windswept style also is a good example of trees that must struggle to survive. The branches as well as the trunk grow to one side as if the wind has been blowing the tree constantly in one direction. The branches grow out on all sides of the trunk but will all eventually be bent to one side. 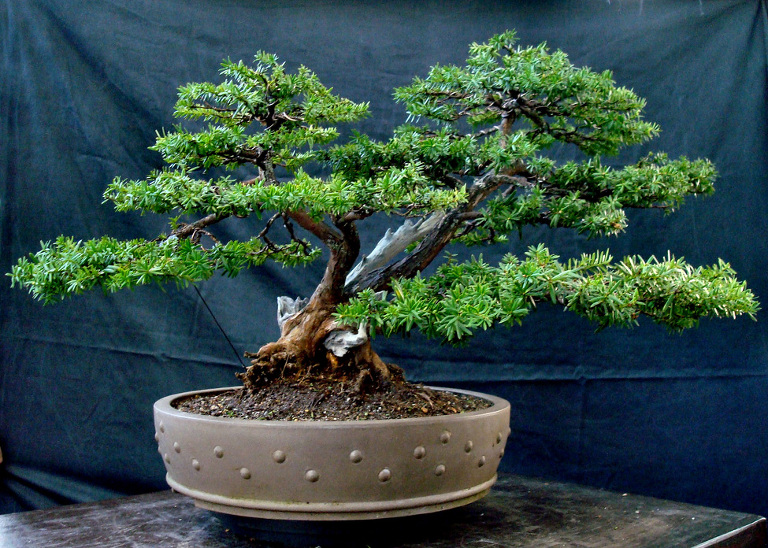 Sokan
The double trunk style is common in nature, but is not actually that common in the art of Bonsai. Usually both trunks will grow out of one root system, but it is also possible that the smaller trunk grows out of the larger trunk just above the ground. The two trunks will vary in both thickness and length, the thicker and more developed trunk grows nearly upright, while the smaller trunk will grow out a bit slanted. Both trunks will contribute to a single crown of leaves/canopy. 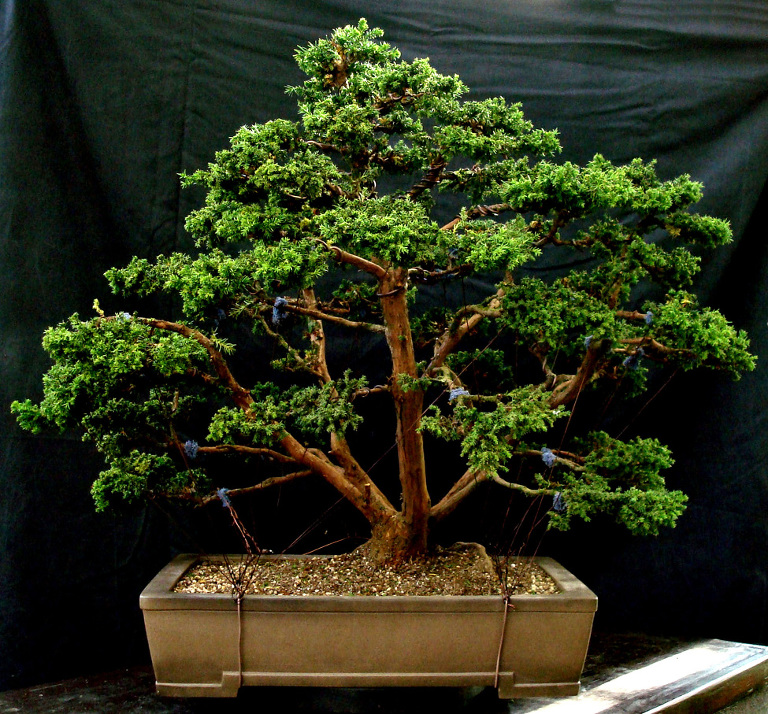 Kabudachi
In theory the multi trunk style is the same as the double trunk style, but with 3 or more trunks. All trunks grow out of a single root system, and it truly is one single tree. All the trunks form one crown of leaves, in which the thickest and most developed trunk forms the top.

Yose-ue
The forest style looks a lot like the multi-trunk style, but the difference is that it is comprised of several trees rather than one tree with several trunks. The most developed trees are planted in the middle of a large and shallow pot. On the sides a few smaller trees are planted to contribute to one single crown. The trees are planted not in a straight line but in a staggered pattern, because this way the forest will appear more realistic and natural.

Growing on a rock Bonsai style

Seki-joju
On rocky terrain, trees are forced to search for nutrient rich soil with their roots, which can often be found in cracks and holes. The roots are unprotected before they reach the ground so they must protect themselves from the sun: a special bark grows around them. With Bonsai the roots grow over a rock into the pot, so caring for this tree isn’t really different from caring for any other style. You will find Juniper bonsai are suitable for this style, but also the Bonsai ficus.

Growing in a rock Bonsai style

Ishisuki
In this style the roots of the tree are growing in the cracks and holes of the rock. This means that there is not much room for the roots to develop and absorb nutrients. Trees growing in rocks will never look really healthy, thus it should be visible that the tree has to struggle to survive. It is important to fertilize and water often, because there is not much space available to store water and nutrients. The rock in which the Bonsai grows is often placed in a shallow pot, which is sometimes filled with water or fine gravel.

Ikadabuki
Sometimes a cracked tree can survive by pointing its branches upward. The old root system can provide the branches with enough nutrients to survive. After a while new roots will start growing, eventually taking over the function of the old root system. The old branches which now point into the air develop into trunks with multiple branchings as a result of the increased influx of nutrients. These new trunks contribute to one single canopy. 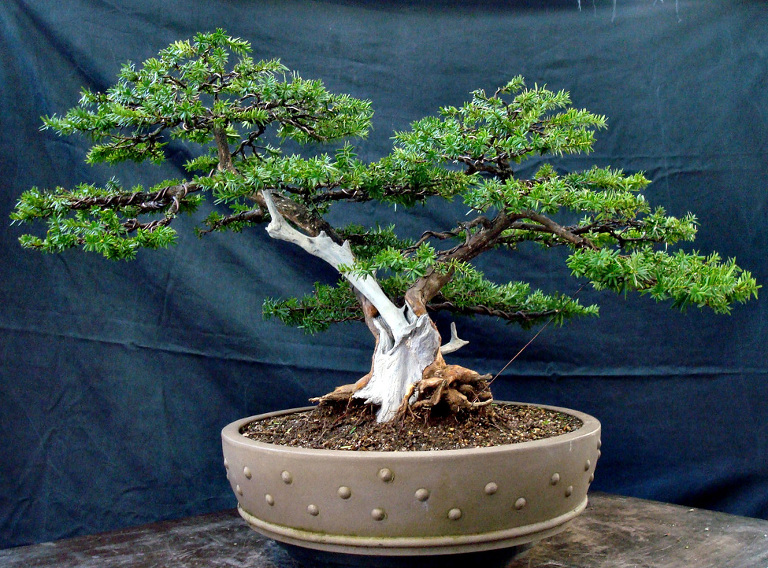 Sharimiki
As time passes, some trees develop bald or barkless places on their trunks as a result of harsh weather conditions. The bald part usually begins at the place where the roots emerge from the ground, and grows increasingly thinner as it continues up the trunk. Intense sunlight will bleach these parts, forming a very characteristic part of the tree. With Bonsai the bark is removed with a sharp knife and the barkless spot is treated with lime sulphur in order to speed up the bleaching process and it also preserves the wood.